As multitools have become an essential part of everyday carry, the need to pack more in one small and compact piece of metal has been growing increasingly. With functionality becoming more and more versatile, the durability factor of a multitool has also seen a major upgrade especially now as Leatherman and other manufacturers are starting to offer a 25-year warranty on their products. But since nothing can withstand the test of time, it’s important to keep your trusty pocket friend in shape. 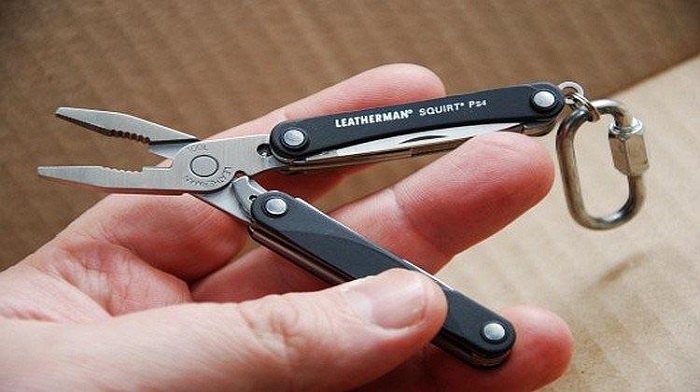 Although most quality multitools today are made of corrosion-resistant materials such as stainless steel, that doesn’t mean they will last forever. Rust can still form over time despite having a tool such as the Leatherman Squirt PS4 made of 420HC steel – it will just take longer than usual and this is why you need to remove it as soon as you spot it and keep your tool well lubricated.

Removing difficult spots of rust will require the use of an abrasive sponge but don’t be too aggressive with it as you can leave scratches or even a dull surface. In case you encounter hard to remove stains, you can easily remove them with a rust eraser which you will use to lightly sand out the surface.

Regular maintenance using various types of lubricative solutions and cleaners based on PTFE (Teflon) or other lubricants like mineral or 3-in-1 oil. Mineral oil is the most versatile as it can be used on every part including tools you’ll use for food prep, while the 3-in-1 oil is meant to be applied on tools that won’t be used for food prep.

WD-40 is a great all-purpose lubricant but it can be detrimental when ingested, so make sure you keep it away from the knife. Also, dry lubricants should not be used with food prep tools since they usually contain graphite, calcium fluoride, boron nitride and the above-mentioned PTFE. WD-40 and other low viscosity oils like CRC and Liquid wrench can also be used to clear out water trapped between joints. 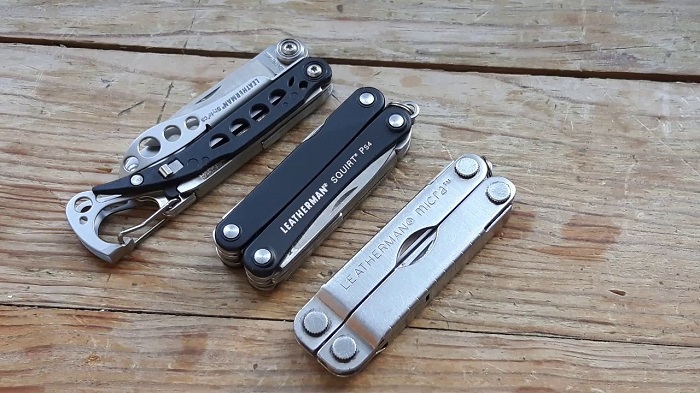 Applying lubricants should be done with one drop per pivotal point/ pivot mechanism since putting too much can cause more harm than good as this way dust and debris will stick to the lubricant and eventually damage the mechanism. In case the lubricant’s delivery method makes it difficult to apply the solution, you can always use a toothpick to deliver it into the pivot.

Once the lubricant is applied, open and close the mechanism several times so it makes its way in. Do this for every pivotal point and try not to make the handle greasy. The lubrication of your Leatherman Squirt PS4 should be done after a cleaning session, but you can lube it between cleanings to keep it running as smooth as possible. This is important if you live near the coast since the salt level in the air is pretty high which can cause corrosion pretty quickly.

Every time you’ll want to clean your Leatherman Squirt PS4, you’ll need to start off first by getting rid of any incidental debris it has picked up from all that carrying around in your pocket or bag. Lint is the usual suspect which can get stuck between the pivoting mechanisms and cause grinding noise if you don’t get it out with a nice sharp toothpick. Make sure to blow out cracks and crevises with a can of compressed air too.

After the removal of all the lint and debris, you should wash the knife with warm soapy water and since it’s made from 420HC steel you won’t have to worry about getting it wet, but make sure you don’t use abrasive pads or other sharp objects. Instead, use an old toothbrush with soft bristles to scrape it off and make sure you get in on each pivot mechanism and use a mild dishwashing liquid  as it is effective against grease and grime. Be wary not to get cut when washing the blade, of course, this doesn’t apply if it is blunt.

It is also important to leave the tool to dry off completely before you start using it again as even the smallest amount of moisture can cause various components to start corroding. To make sure everything is 100% dry you can use the can of compressed air you used earlier to blow out the lint.

Unlike multitools with a serrated blade, for which you have to use a sharpening system specifically made for this type of blade (in order to maintain the curvature of the serrations), the Leatherman Squirt PS4 requires a straight-edged blade. This type of blade can be sharpened with any standard sharpening equipment, like whitestones and rods which should be used according to Leatherman’s standard sharpening angle of 32° – 16° on each side.

Not Much Into Camping? Here Are Steps to Help You Make Camping Comfortable

Steps To Selecting The Right Perfume For You – Part 2

Steps To Buying A Property For Sale In The USA

Steps To Follow For Proper Use Of Crane Trucks

Steps To Choosing Equipment for Your Construction Project

Steps To Take To Prevent Injuries From Mobile Cranes

Steps To Selecting The Right Perfume For You – Part 1

Steps To Testing An Ethernet Switch